Food grade strong base anion resin to help reduce and remove tannins and nitrates from incoming water. Sold in bulk bags for refilling filter cartridges (sold separately). If you're on well water and/or your supply has a brownish discoloration that can't be removed with a sediment or Iron/Manganese filter an anion filter could be the solution you're looking for.

Tannins are astringent, bitter-tasting plant polyphenols that bind and precipitate proteins. The term tannin usually refers to the source of tannins used in tanning animal hides into leather. However, in this case we are referring to the brown discoloration in water, often caused by decaying organic matter. Tannins in well waters form from humic acid, a complex mixture of many different acids containing carboxyl and phenolate groups produced by biodegradation of dead organic matter. Tannins can also be found in peat, coal, many upland streams and ocean water. Tannin molecules tend to form anions in water above pH 6 and can be treated with anion exchange resins, below pH 5 tannins are better treated with activated carbon.

Nitrates are chemical salts most often used in fertilizers, but can also occur naturally in mineral deposits. Exposure to nitrates can have long term health effects including kidney damage and some types of cancer, exposure for infants can be particularly dangerous and can lead to serious health conditions including methemoglobinemia. Generally fertilizers are broken down by plants as the use the material to grow, but residue and run-off from agriculture getting into the local water table is the main source nitrates in water.

This exchange anion is intended for use in all types of de-ionizating water filtration systems as well as chemical processing and scientific applications, including the production of ultra pure water, organic substance separation, antibiotic medicine refine, biochemical product separation and extraction.

Tannin removal is an application that some dealers have felt uncomfortable tackling. Tannins, until several years ago, were treated with standard strong base macroporous anion resins manufactured with styrene and divinylbenzene. This type of resin worked well in some areas but failed in other areas. Over the last five to 10 years resins have come into the residential water market that have been more successful and have made this water treatment problem more attractive to the water treatment dealer.

It is usually recommended that the water be softened prior to the tannin removal unit. The softener removes hardness and metals (like iron) that might otherwise foul the anion resin. Tannins will pass through softening (cation) resin without any detrimental effects. Hardness levels greater than 10 grains passing into a tannin removal unit may precipitate calcium carbonate, which is a white floc that can restrict flow in the system and blind exchange sites on the resin. Metals like iron also can foul the anion resin, reducing the anions' ability to remove tannins. Cleaning methods for these foulants will be discussed later.

Tannins are large molecular weight organic compounds. They are formed through the decomposition of plants and, to a much lesser degree, animals. These organics are generally found in surface waters or shallow wells. There are two primary categories in which tannin fall: Humic acid and Fulvic acid. These are simplified structures of very large molecules. Gallic acid, guaiacyl, syringyl and cresylic moieties are the building blocks of these organic molecules (Kunin, 1986). The structure of the tannin varies from location to location, depending on the vegetation in the area. Tannins can cause a yellow to dark tea color in water and may impart taste and odor. Tannins are not directly regulated by a governmental agency, however there is a secondary drinking water standard of 15 alpha units for color. A secondary drinking water standard is not federally enforced. Tannins are not a health issue; however, they are aesthetically displeasing.

As many of you know first hand, tannins can be difficult to remove from water. One treatment method may be effective in one area, but may be totally ineffective 10 miles down the road. It is dependent on the vegetation in a given area. Styrene-based macroporous anion resin has long been used to remove tannins from water. This type of resin worked well in some areas but poorly in other areas. More recently acrylic-based resin have emerged on the market and are producing excellent results in most cases. They can be manufactured as a gel or with macroporosity. There are also low crosslinked/high water retention styrene-based resins that are being used successfully.

The removal of tannins via anion exchange resins occurs through both an ion exchange and an absorption process. Tannins have a slightly negative charge. Because of this, they are exchanged for chloride onto the resin. It is also believed that the anion resin can absorb organics. Salt is used to regenerate the anion resin. Generally, the resin will be brined at approximately 10 lbs per cubic foot salt (NaCl). It is extremely important to regenerate the resin frequently. Once the tannins are exchanged/absorbed onto the resin they will tend to migrate into the inner matrix of the resin bead. Once this occurs it is very difficult to regenerate the tannins from the resin. The system should be regenerated every two to three days. Frequent regenerations will reduce the likelihood of organic fouling. Longer regeneration intervals will promote organic fouling, whether the anion resin is acrylic or styrene based.

Tannin resin is often mixed with softening resin, which reduces the amount of space required by the equipment and reduces the cost of the system. This type of design has performed satisfactorily in many areas. However, during the regeneration the salt will displace calcium from he cation resin and potentially alkalinity from the anion/tannin resin, which can promote calcium carbonate precipitation. It can be seen as a white precipitate in the resin bed and a coating on the drain line. Pressure drop through the system or a milky-white substance in the backwash water are indicators of precipitation. If a small sample of the floc can be removed from the system and placed into some dilute hydrochloric acid (muriatic acid) the particle will bubble. The bubbling is due to the release of carbon dioxide. Cleaning methods will be discussed later.

Anion resin has a lower density than cation resin. When an anion resin is backwashed it should not be backwashed at the same flowrate as a cation softening resin. The backwash flowrate of a cation is approximately five gpm/square foot (sf) of area. The anion should be backwashed at a flowrate of approximately two gpm/sf. If the tannin removal unit is a dual bed system (softening resin and tannin removal resin) the backwash must be adjusted or an upper screen or basket should be used in the valve. This modification will prevent resin loss.

Tannin resin is frequently associated with a fishy odor. A residual by-product of anion resin is an amine. The amine coming from the resin is generally in very low concentrations, however the odor threshold is approximately 40 parts per billion. Although the release of this amine is not a health issue, it is aesthetically displeasing. The fishy odor is more common when the water is chlorinated and has a high pH (>8). This is often the case when chloramines are used as a disinfectant. Ammonia and chlorine are mixed causing an environment that will break down resin and the ammonia will usually cause the pH to increase. It is best to remove any type of oxidant (chlorine, chloramine or peroxide, etc.) prior to the anion unit.

As water passes through a chloride-form anion resin, alkalinity will be removed from the water. Alkalinity is the buffering factor in water. As alkalinity is removed the pH of the water will decrease. The anion resin has a limited amount of capacity for alkalinity and should decrease the pH for only a short period of the service cycle. The chloride content of the treated water will increase. Check the local water treatment regulations for chloride limits, if any. Chlorides have a secondary drinking water standard of 250 ppm. If the TDS levels exceed 800 ppm in the influent water a salty taste may be detected on the treated water. RO will be required to reduce the TDS and salty taste.

When a tannin color passes through a unit that has previously worked properly, an attempt to clean the resin should be performed. Soda ash (Na2CO3) can be added to the brine to help clean the anion resin. Typically 0.5 to 1 pound of soda ash is added to the brine well. The soda ash will increase the pH of the brine causing the resin to swell to a greater degree. The swelling will make the pores slightly larger so more of the tannins can be eluted from the resin. Tannins also are more soluble at the higher pH, producing an environment to help strip the tannins from the resin. This cleaning procedure can produce the fishy odor. After the resin has been treated with soda ash a second regeneration should be performed to convert the resin completely to the chloride form.

If soda ash is unsuccessful in cleaning the resin, a chlorine treatment can be used as a last resort. Place approximately four to eight ounces of standard household bleach in the brine well. Place the system into regeneration. Once a chlorine odor is detected in the drain line, shut the system down for one to two hours. Finish the remainder of the regeneration cycle after the system has soaked. A second regeneration should be performed to remove any residual chlorine. This cleaning procedure is very hard on the resin and should be attempted as a last resort. Oxidants, such as chlorine, will attack and break down ion exchange resin. There is no ion exchange resin on the market that is chlorine resistant; there only are resins that are more chlorine tolerant. The tannin resins in the water treatment market today are relatively chlorine intolerant. If this treatment is unsuccessful, replacement must be considered.

If the unit contains both cation and anion, regenerate the bed with salt before attempting any cleaning procedure. Any metals, like iron, will precipitate on the cation resin, due to high pH or oxidation.

Other Methods of Removing Tannins

Oxidizing agents like chlorine are effective at breaking down organic compounds like tannins. A simple jar test will show the concentration and retention time required to oxidize tannins. An activated carbon unit following the retention tank will remove the chlorine and may adsorb other organic compounds in the water. Some types of activated carbon alone may reduce the tannins to acceptable levels. Consult your carbon manufacturer for the appropriate type of product. It should be noted that the reaction between chlorine and tannins might produce trihalomethane (THMs) which are carcinogens.

Reverse osmosis is another effective method for removing tannins. Since tannins are high molecular weight organics RO should reject them effectively. However, tannins will tend to foul the membrane in the system. It also is very expensive to properly install a whole house RO system to treat all of the water. Check with your local water doctor for more information.

The primary tannin removal technologies of the past were carbon- and styrene-based ion exchange resin. More recently, acrylic-based and high water retention/low crosslinked styrene-based anion exchange resins have surfaced into the residential water treatment market and seem to outperform the traditional ion exchange resins used for tannin removal. Although no resin is 100 percent effective, success has been greatly increased with these resins. If you haven't tried treating for tannins recently you may want to give it another try. With any new water treatment application or product put several systems in the field for pilot testing. Once the pilot study has validated the product or treatment in a given area, go after the business. 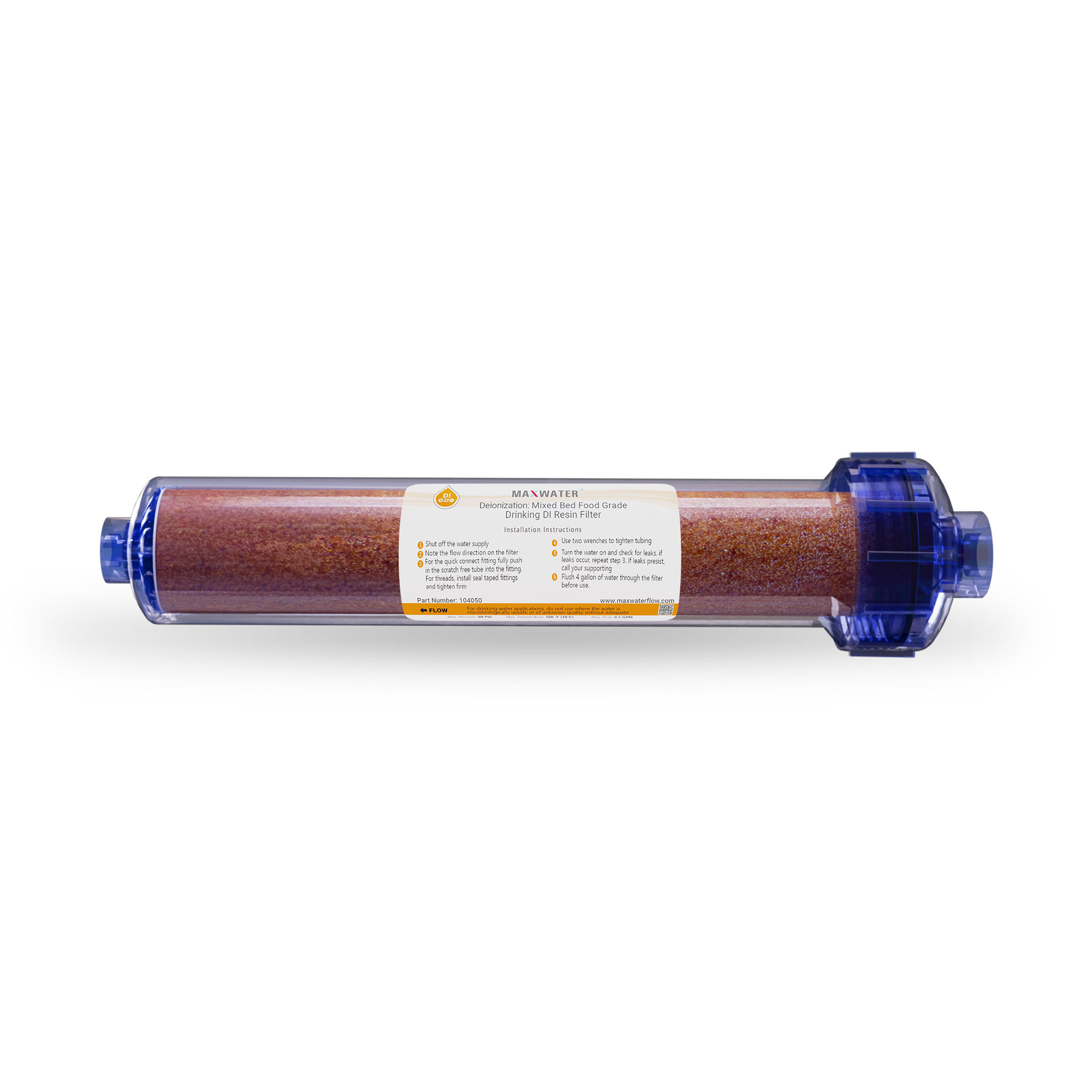 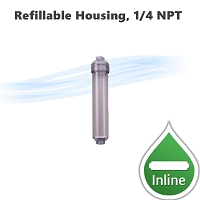 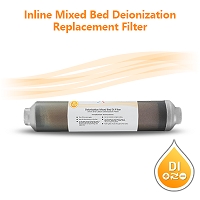